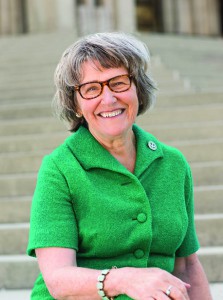 Sister Simone has often been featured in the national and international media, including appearances on 60 Minutes, The Colbert Report, and The Daily Show with Jon Stewart. She has received numerous awards, including a Franklin D. Roosevelt Four Freedoms Award and the Defender of Democracy Award from the international Parliamentarians for Global Action. She is also the author of A Nun on the Bus: How All of Us Can Create Hope, Change, and Community, published in April 2014 by HarperCollins.
“We are honored that Sister Simone will be here to help us mark our 50th anniversary,” said Mary Patoka, CAP president and CEO. “Her work and advocacy on economic justice issues ties closely with the work we do to helping provide opportunities to underserved people and communities in central and eastern Wisconsin.”

Sister Simone will speak as part of CAP’s one-hour recognition program, scheduled to begin at 6:30 p.m. The program will also feature an introduction from Patoka and recognition of CAP clients who made significant progress in the previous year. A limited amount of public seating is available. RSVP is required. Visit capservices.org/50th to reserve your space today.

“We are grateful for the support of each of these sponsors in helping us acknowledge 50 years of service and get our message out in the community,” said Patoka. “We look forward to marking this milestone by reflecting on where we’ve been, as well as sharing our vision of a future in which more equitable communities mean more people and families are able to achieve their goals.”