CAP Services’ Family Crisis Center (FCC) recognized its 40th year of service in 2018. The FCC started in 1978 as a result of input from CAP’s Community Needs Assessment survey, which identified a need for a safe place to stay for survivors of domestic abuse.
That period of time was fraught with many leaders who did not believe domestic abuse existed in our community. Others believed domestic abuse to be a necessary fact of life, like one law enforcement officer who said during an early organizing meeting that “a woman might need a tune-up now and then,” an attitude that was unfortunately all too common. 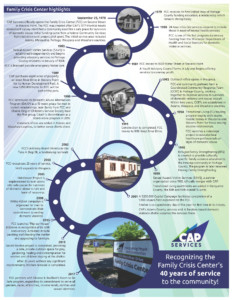 FCC staff and leadership have worked tirelessly to educate, inform and advocate, ensuring others understand the realities of domestic abuse and its consequences. Domestic abuse is not an issue of someone having a bad temper, it is about someone exerting power and control over another often through fear, intimidation, isolation and abuse.

That work led to meaningful change, both in the lives of survivors and in the larger community. By 1995, four counties – Adams, Portage, Waupaca and Waushara – had formed Coordinated Community Response Teams (CCRTs). Representatives of law enforcement agencies, the judicial system, corrections, schools and health providers joined advocates in a commitment to a community-wide approach to domestic abuse that stopped blaming victims and held perpetrators accountable for violence. CCRTs continue to be active in the work we do today.

The FCC was envisioned as a rural model that maximized resources by sheltering both victims of domestic abuse and runaway youth/youth in crisis. State officials have more than once questioned co-locating these groups. Forty years of service have proven the model can work, with child and youth services remaining an important part of what we do today.
Over the years, the FCC has expanded its programing and its reach. The FCC operates programs dedicated to the needs of sexual assault survivors, transitional living for survivors of domestic abuse, and bicultural and bilingual services to central Wisconsin’s Hmong- and Spanish-speaking populations.

It also maintains full-time staff at offices in Waupaca and Waushara counties. The FCC has grown with its clients and the communities it serves to be so much more than just a shelter, but an instrument of healing and transformation.