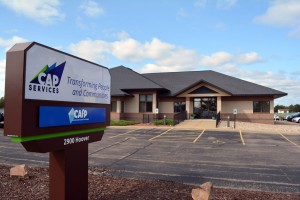 “The final stretch of a fundraising campaign can be a challenge,” said CAP President and CEO Mary Patoka. “We are extremely grateful to all of our donors and especially to Delta Dental of Wisconsin, who were not only our largest single donor, but whose match challenge really helped reenergize the campaign and get us across the finish line.”

Delta Dental of Wisconsin accounted for $60,000 of the total raised, $10,000 of which came through a matching gift. Delta Dental matched 50 cents of every dollar raised for CAP’s capital campaign from May 15 through August 15 up to $10,000. CAP raised just over $45,000 during the challenge, which combined with the match to put it over its goal.

CAP’s Hoover Road location opened in June 2017. It houses the corporate and early childhood education administrative staff previously located on Highway 10 East, as well as business and auto lending staff previously located at CAP’s Program Office on West River Drive. The cost of the building was paid through the sale of property and the capital campaign.

Jeff and Joan Budelier; Deb and Marc Wolding; Bushman Electric Crane & Sign; and Resource One Installation & Service made significant in-kind donations to support the move to the building, new equipment and other needs.

CAP Services, Inc. is a private, nonprofit community action agency that has been advancing social and economic justice for people and communities in Marquette, Outagamie, Portage, Waupaca and Waushara counties since 1966.

In 2017, CAP programs reached nearly 2,700 households with over 9,500 members. Those services resulted in people getting better jobs; securing more reliable transportation to get to work; accessing affordable housing; starting and expanding businesses; finding safe shelter and emotional support; strengthening their families and more.